The release candidate 2 of Rails 2.2 has been just announced. Let’s see some of the most interesting (IMHO) news.

Personally I often use gem server to browse through classes documentation, but sometimes a more homogeneous “guide” could help a lot.

A new Rake task is added:

it generates the new Rails guides under doc/guides. These, still a work in progress, cover all the (basic) aspects of the framework: 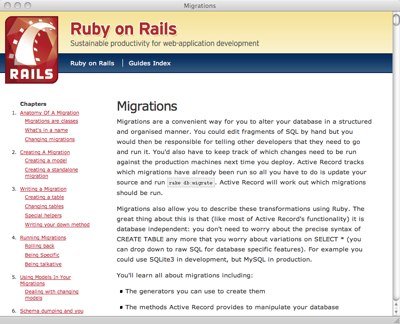 Now Rails is thread-safe (especially in waiting for Ruby 1.9 release), obviously “the whole thing” depends on sever infrastructure you deploy it.

The facility of connection pooling is introduced for database requests: a restricted set of database connections reused among different requests. To enable it insert the following configuration directives in config/databases.yml:

Now it is possible to spcify joins conditions using an hash:

Obviously a lot of other work has been done, you can read more about it on official announcements.