Maybe some of you - smart coders ;) - already know that Twitter provides a geolocation facility through its API. For example, pointing our browser to this url:

and it will show you all the tweets coming from users located in New York city (ok, only in no more than 25km from its supposed centre…). 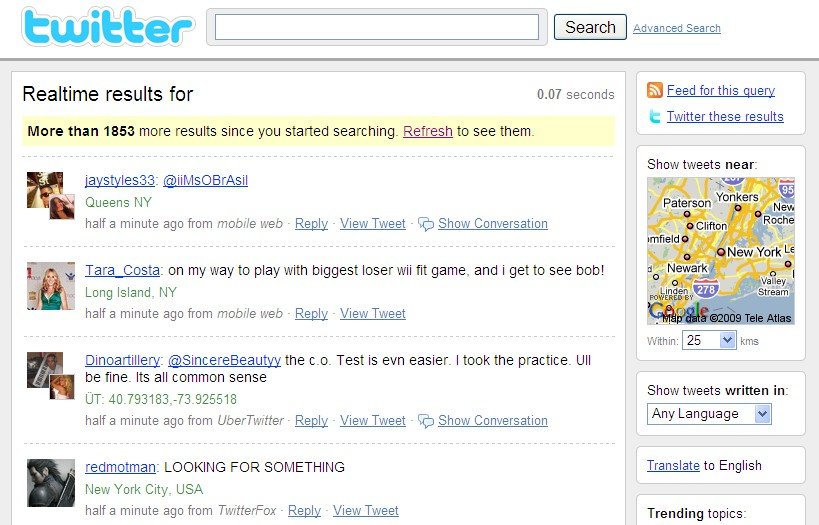 The previous API usage is really straightforward: we have to provide latitude,longitude,radius. Period.

Unfortunately it searches tweets by user registered position, and this is not dynamic. If I travel with my iPhone and I’d like to tweet about something happening now and here I’m not able to do this.

Fortunately Twitter recently announced to introduce geolocation at tweets level. And that is a BIG IMPROVEMENT: we’ll be able to follow tweets physically near us at any given moment, the opportunities about that are endless…

The only concern is about the format will be used: 140 characters are not too much and adding geolocal information will eat 9 * 2 digits = 18 characters (for latitude and longitude) and maybe other 5 characters for the radius (eg: 25km, 500mt, 1ml, 1.5km). This sum up to 23 characters… leaving only 117 characters for our tweets: isn’t that too less?

Maybe some “geolocation shortener services” (a la http://bit.ly or http://tinyurl.org) will born as soon as we expect and maybe - it’s only a supposition of mine - Reunion Island (formally an overseas European region :), with its first level domain .re) will gain in popularity with some of the above supposed services like that: